Bishop Ronald W. Gainer of Harrisburg, Pennsylvania, was the celebrant and homilist for St. John Neumann’s feast-day Mass on Jan. 5 at the Shrine. Read the text of his homily below:

At the time of John Neumann, America represented new values and new hopes. Bishop Neumann saw these in their relationship to the ultimate, supreme possession to which humanity is destined. . . . His love for people was authentic brotherly love. It was real charity: missionary and pastoral charity. It meant that he gave himself to others. Like Jesus, the Good Shepherd, he laid down his life for the sheep, for Christ’s flock: to provide for their needs, to lead them to salvation. 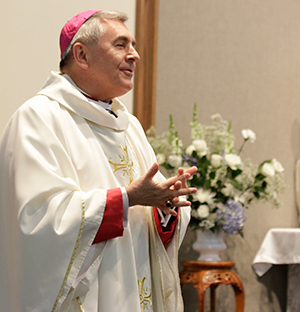 Bishop Ronald Gainer gave the homily for the St. John Neumann feast day Mass on Jan. 5, 2019. He is pictured above at Our Mother of Perpetual Help Church in Ephrata, Pennsylvania.

These are the words of Pope Paul VI, now Pope St. Paul VI, taken from the homily he preached at the Mass of Canonization for St. John Neumann on June 19, 1977. Those same words serve us today, almost 42 years later, as an excellent summary of the life and heroic virtues of the saint we gather today to honor and to ask his intercession for ourselves and for the Church. It is providential that this year the feast of St. John Neumann occurs during those days that the majority of U.S. bishops are gathered in Chicago on retreat. St. John Neumann was the first U.S. bishop to be recognized as a saint, and so as we gather together here, let us carry in our prayers the intentions of the bishops that the Holy Spirit may work powerfully within them and among them during this time of reflection and spiritual renewal.

Permit me to begin by expressing my genuine gratitude to Father Raymond Collins, Director of the National Shrine of St. John Neumann, to Father Paul Borowski, Provincial, and to the whole Redemptorist community for the honor of this invitation to be the principal celebrant of today’s Mass and to share this homily with all of you.

My Diocese of Harrisburg was established in 1868 and so during the entire episcopal ministry of Bishop John Newman the counties of the Harrisburg Diocese were part of that vast territory that made up his flock. His signature in many of the sacramental registers of our parishes attests to his zealous pastoral ministry. To honor our former bishop and saint, the chapel in our Diocesan Center is named St. John Neumann Chapel.

In December 2002, one of the first things I did after the announcement that I was named a bishop, was to drive down from Allentown to St. Peter’s to spend time in prayer at the tomb of St. John Neumann, seeking his intercession for my episcopal ministry.

Also, as a native son of Pottsville, Pennsylvania, I take special pride in St. John Neumann’s desire that the Holy See might create a new diocese—either at Pottsville or Wilmington, North Carolina—and to appoint him to that newly established diocese. This was a very interesting and very trying time in the life of our saint.

Those of us who pray the Office of Readings on this feast are reminded each year of the letter Bishop John Neumann wrote to the Cardinal-Prefect of the Congregation for the Propagation of the Faith in October 1858.

It seems from his conversations with bishops at the Baltimore Council, a rumor had spread that he wished to resign the episcopal office. In his letter he states emphatically that such a desire “never entered my mind.” The letter is a striking testimony to the obedience and humility of John Neumann. Even though it had not entered his mind, he states that he was “prepared without any hesitation to leave the episcopacy” if that is what Pope Pius IX wanted. He wrote, “I desire nothing but to fulfill the wish of the Holy Father, whatever it may be.”

As an immigrant from Bohemia, our saint felt ill-suited for the very cultured world of Philadelphia and felt that he might be more at home and better equipped to serve in a more rural area among fellow immigrants. But only if it was the wish of the Supreme Pontiff.

In addition to his remarkable humility and obedience—sure signs of authentic holiness—St. John Neumann is remembered for his pastoral work, organizational skills, and acts of kindness. The same zeal with which he exercised his priestly ministry drove his vocation as a bishop. He exhausted himself in making pastoral visitations, even to the farthest parishes in his diocese. He had a gift for learning languages: some sources say he was fluent in six, other sources say eight languages. This linguistic gift he used generously as a confessor for the many immigrant Catholics who comprised his flock.

In 1853 on the Feast of Corpus Christi, he inaugurated the annual observance of the 40 Hours Devotion in the parishes of the diocese—a first in the United States. He recognized what the Second Vatican Council a century later would tell us, namely, that the eucharistic mystery is “the source and summit” of our life in Christ. St. John Neumann knew that and drew the sheep of his flock to our eucharistic Lord.

His organizational skills were very much in evidence in establishing parishes and schools. In his 82 months as bishop he established over 80 parishes throughout the counties of his sprawling diocese. By establishing so many parochial schools and organizing them into a diocesan system, he is honored as the father of our Catholic school system.

He was the principal author of the Baltimore Catechism: the fundamental text for Catholic religious formation for a century and still very useful today.

As a religious himself, he was extremely supportive of religious orders, brought many to the diocese and founded the Sisters of the Third Order of St. Francis of Glen Riddle.

In his first homily at the Chrism Mass in 2013—only 15 days after being installed—Pope Francis used an image that has been frequently referenced throughout his pontificate. He said in his homily, “The priest who seldom goes out of himself misses out on the best of our people, on what can stir the depths of his priestly heart. This is precisely the reason why some priests grow dissatisfied, lose heart instead of being shepherds living with the smell of the sheep. This is what I am asking you: be shepherds living with the odor of the sheep.”

I cannot think of a more stellar personification of that kind of shepherd than St. John Neumann, priest and bishop. His people and his priests knew that their names and their needs were written on his heart and he was willing to carry the flock entrusted to his care on his shoulders.

This is the very image placed before us in today’s Gospel. According to Jesus, being a shepherd means “laying down your life for the sheep.” The shepherd’s role, as Jesus describes it, is extremely costly. But the authentic shepherd doesn’t count that cost. He never hesitated to welcome marginal members of society; shepherds must care for all their sheep—even the difficult ones. The ones that are feared, impaired, disliked, and shunned are exactly the sheep to whom our Lord reached out.

Let me propose three levels of meaning from this rich biblical image.

First, the Good Shepherd is contrasted with the hired hand who works to be paid and has no intention of putting his life at risk for the welfare of the sheep. The hired hand flees in the face of danger, putting himself in high contrast with the image of the One whose care for the sheep proves very dear.

For the Good Shepherd, tending the sheep is not just a job to put food on the table. It is his reason for being and his reason for dying —the purpose for his living and for laying down his life.

Secondly, an intimate relationship binds together sheep and shepherd in an inexplicable way: “I know mine and my own know me.” This means that there are no strangers in the flock. Each one knows and is known. There is none unrecognized.

This kind of intimacy can only be rooted in the divine life of the Trinity, in the intimate communion between the Father and the Son and Holy Spirit. This knowing is more than simple recognition; it includes a deep involvement in the life of the other.

This intimacy is not self-interested coziness, a kind of exclusive club that is turned inward. Not at all. And so the Good Shepherd reminds us: “I have other sheep that do not belong to this fold.”

Scholars may be divided as to what Jesus means exactly by “other sheep,” but in any case, the flock is not finally fixed. It is an open-ended, still-in-progress flock, and there are always others who need to recognize the Shepherd’s voice and to become part of His fold.

The third layer of this image is something of a paradox. In laying down His life for His sheep, Jesus describes Himself as totally free—this is His voluntary sacrifice—yet it is in obedience to the Father.

His life is not taken from Him. He is not the reluctant victim of His scheming enemies, nor is He simply under the control of His opponents who gain the upper hand and forcibly put Him to death. Jesus finds freedom in His obedience to the Father’s will.

True freedom does not entail an arbitrary choice to please myself but is rooted always in the will of God. The power of the Easter mystery can emerge only from free self-giving.

Giving up his life for the sheep was something a real shepherd might be called upon to do under very dire and exceptional circumstances. When we view our Lord through this image, it teaches us that this is what He will most certainly do to save us—when He gives up His life for us in crucifixion.

I can only imagine that St. John Neumann found great consolation in this aspect of the Good Shepherd image. He must have been overwhelmed at the thought that Christ loved him so much as to lay down His life for him. He must have found great comfort in this image, so much so that he chose as his episcopal motto Passio Christi, conforta me—”Passion of Christ, comfort me.”

St. John Neumann, you were a good shepherd to the sick, at home with the poor, shepherd to sinners and to foreigners who made their new home here in this land, just as you had. You found true and authentic freedom, true and genuine holiness, in imitating the humble obedience of Christ to the will of His Father.

St. John Neumann, intercede for us that the Father’s will be done through us, that we may grow to imitate the Good Shepherd in humility, obedience, and faithfulness according to the example you have given us.

Through the intercession of St. John Neumann, may we too allow ourselves to be overwhelmed by the love Our Lord has for us, and may the redemptive passion of Christ comfort us.