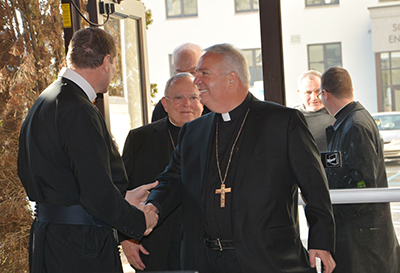 Archbishop-elect Nelson J. Perez visited the National Shrine of St. John Neumann on January 24, making his first public appearance as the new shepherd of Philadelphia.St. John Neumann, a Redemptorist, was the fourth bishop of Philadelphia, ordained in 1852 and serving until his death January 5, 1860. He was canonized in 1977.

On January 23 Archbishop Charles J. Chaput, 75, stepped down, four months after submitting his letter of resignation to Pope Francis.

Shrine director Father Ed Faliskie, C.Ss.R., gave the new archbishop a first-class relic of St. John Neumann during the visit. Students from St. Peter the Apostle School were present, and Archbishop Chaput asked them to pray that with God’s help, Archbishop Perez would “become just like St. John Neumann,” according to an article published January 24 on Catholicphilly.com.

The new archbishop, 58, is a native of Miami, Florida. He was ordained a priest in Philadelphia in 1989 and appointed an auxiliary bishop of Rockville Center, New York, in 2012.

He was made bishop of Cleveland in 2017 and appointed archbishop of Philadelphia on January 23, 2020. His installation is set for February 18.

Read more about the event here and about Archbishop Perez here. 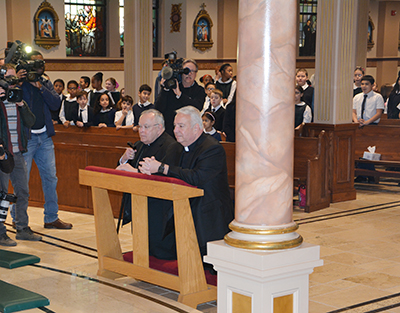 Archbishops Chaput (left) and Perez pray before the tomb of St. John Neumann. 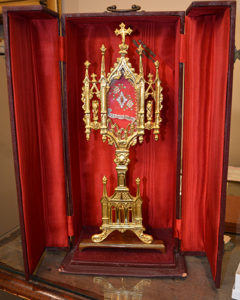 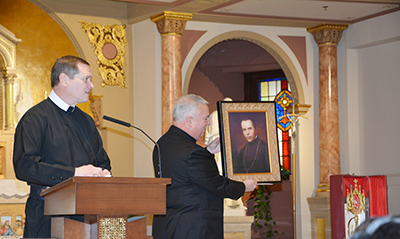 Archbishop-elect Perez holds up an image of St. John Neumann presented to him during his visit.