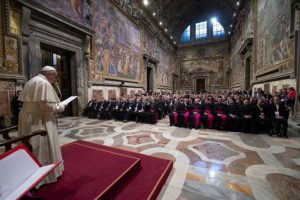 Vatican City (CNA/EWTN News)—Shrines and sanctuaries should be places of welcoming and mercy, where the sacraments can be received, Pope Francis said Thursday to an international gathering of shrine rectors and pastoral workers.

“The shrine,” the pope said Nov. 29 in the Vatican’s Sala Regia, “is a privileged place to experience mercy that knows no boundaries.”

“In fact, when mercy is lived, it becomes a form of real evangelization because it transforms those who receive mercy into witnesses of mercy,” he said.

Pope Francis also told the group he hopes each shrine has the presence of one or more “missionaries of mercy” to help with this evangelical work, and if it does not, that its representatives should ask the Pontifical Council for Promoting the New Evangelization to help.

Missionaries of mercy are the approximately 1,000 priests from around the world Francis authorized during and after the 2016 Jubilee Year of Mercy to spread the message of God’s mercy and forgiveness, particularly through the sacrament of reconciliation.

Pope Francis spoke to priests and lay people participating in an international convention on the daily work and operation of shrines. Held Nov. 27-29 at the Vatican, it brought together 586 participants from five continents. The group plans to hold similar conventions once every three years.

The theme of the gathering was “The shrine: an open door to the new evangelization.” It took place following Pope Francis’ February 2017 decision to move the competency for shrines and sanctuaries to the Pontifical Council for Promoting the New Evangelization.

Speaking to participants, Francis said shrines are irreplaceable because through catechesis and the “testimony of charity” they help sustain popular piety.

He noted two important aspects of a Catholic shrine: prayer and hospitality. He said hospitality is important because when pilgrims come to a shrine, often after having made a long journey, “it is sad when it happens that, on their arrival, there is no one to give them a word of welcome.”

He also warned against paying more attention to the material needs of the shrine than to visitors. Pilgrims, he said, should be made to feel “at home, like a long-awaited family member who has finally arrived.”

Keep in mind, he said, that some people visit religious shrines for reasons other than piety or devotion—for example, because of local tradition, the art present, or the beautiful natural setting.

When people are welcomed, their hearts become more open to being “shaped by grace,” he said. “A climate of friendship is a fertile seed that our shrines can throw into the soil of the pilgrims, allowing them to rediscover that trust in the Church.”

Above all, a shrine is a place of prayer, he emphasized, adding that with many of the world’s shrines being devoted to the Blessed Virgin Mary, there she “opens the arms of her maternal love to listen to everyone’s prayer and to fulfill it.”

He urged sanctuaries to celebrate the sacraments frequently because they are the universal prayers of the Church and to “nourish the prayer of the individual pilgrim in the silence of his heart” since many people visit a shrine wishing to receive a specific grace or the answer to a particular prayer.

“With the words of the heart, with silence, with his formulas learned by heart as a child, with his gestures of piety . . . everyone must be able to be helped to express his personal prayer,” he said.