Join us for 40 Hours Devotion at the Shrine 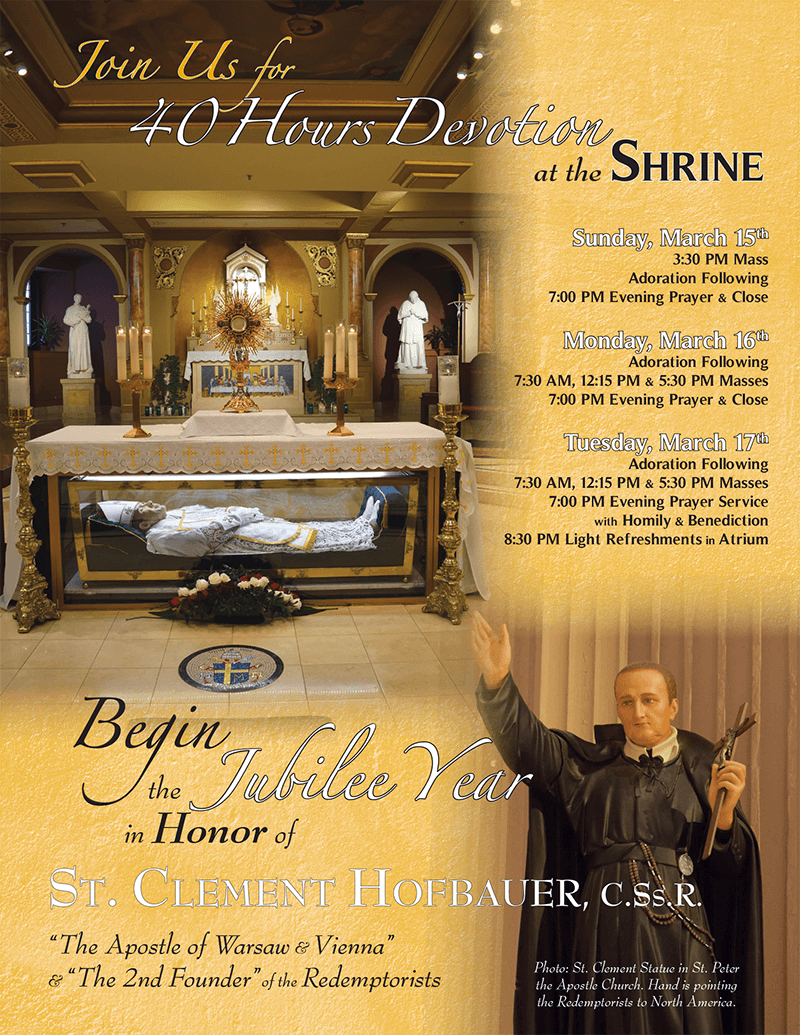 Dear friends and benefactors of the Shrine:

March 15, 2020, is the Feast of St. Clement Hofbauer, C.Ss.R. It is also the 200th anniversary of his death. St. Clement is often referred to as “the apostle of Warsaw and Vienna” for his tireless work in those cities. He is also considered the “second founder” of the Redemptorists, as he brought the Redemptorists across the Alps of northern Italy and eventually throughout the entire world. Redemptorist missionaries are now found in some 75 countries around the world. Much of this can be attributed to the efforts of St. Clement.

For this reason the General Government of the Redemptorists in Rome decided to proclaim a Jubilee Year in honor of St. Clement, from March 15, 2020, to March 15, 2021. During this Jubilee we remember once again the person and work of our brother Clement, whose life was based on love for God and the Holy Church and the desire to lead souls to God.

Clement lived in a very difficult period from the political and religious point of view. It was a period hostile to the Church and to religious life, and he opened a road to a Christian renewal. Thanks to him, the revival of religious life in Warsaw and Vienna took place.

Clement’s love for his neighbor, especially for the poorest and most abandoned, sprang from his great love for God. He was called Father of the Poor because the poor, abandoned, and marginalized found in him a companion and sincere friend. He lived close to the poor, and whatever he had he generously shared with them.

To kick off this Jubilee Year the Redemptorists here at the Parish of St. Peter the Apostle and the Shrine of St. John Neumann will celebrate 40 Hours Devotion beginning Sunday, March 15, and concluding on Tuesday, March 17. This devotion was especially promoted by St. John Neumann, so we can think of no better way to honor St. Clement. We invite you to join us during these days as we honor our Redemptorist Saint, Clement Hofbauer, and pray to our God, the source of all blessings!